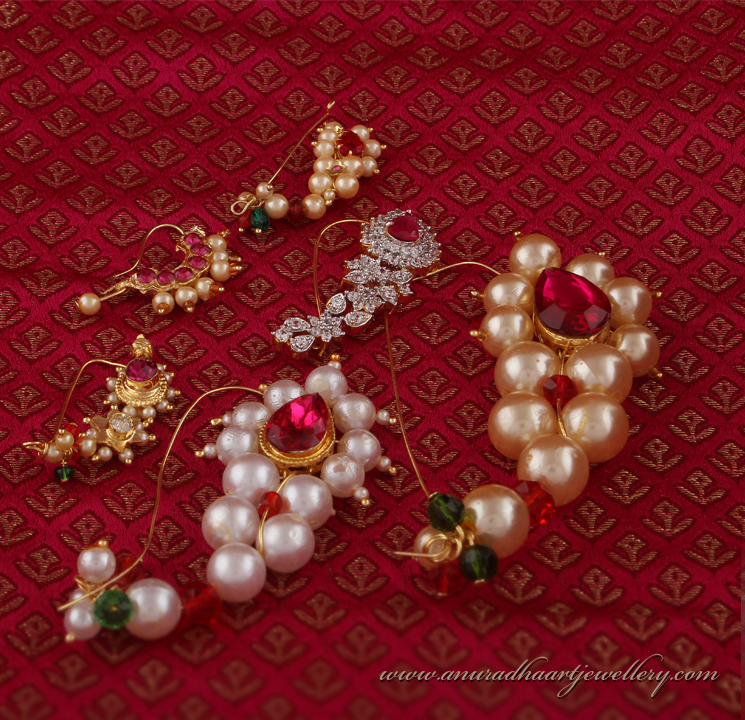 Why is a Maharashtrian Nath different?

Maharashtrian Nath designs or also fondly called as Brahmi naths, have evolved over time. A Maharashtrian Nath is generally made of Gold, and is centrally studded with single coloured stone, surrounded by other small stones with pearls around it.  Nath designers are now experimenting with the designs, length, shape of naths, although, the material used to make them, still remains the same, even after so many years. Majorly, these naths are bought by to-be brides for wedding functions or Pujas. Although most of the Maharashtrian naths look very similar, made with similar components, there is a significance for each design.

Let us have a look at the Latest Maharashtrian Nath Designs one by one:

This nath design is inspired by a character named Banu from the famous mythological TV serial ‘Jai Malhar’, which aired on Maharashtrian TV channel ‘Zee Marathi’. In the series, actress Isha Keskar played the role of Goddess Banai– fondly called as Banu and wore a typical maharshtrian nath design- semi-circle, studded with single row of stones and pearls. Inspired by this design, jewellers started a series of Banu Nath designs which have become very popular today. 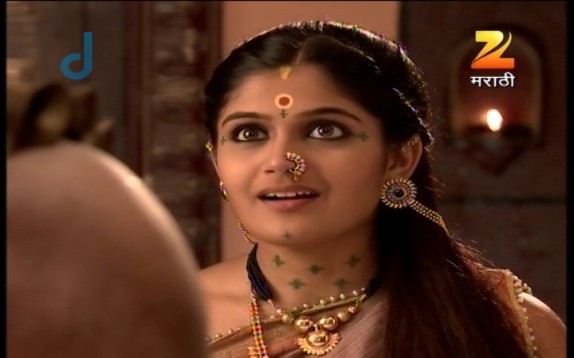 The Karwari Nath is a symbol of culture and tradition from the Maharashtra-Karnataka Border and looks quite similar to Banu nath. The word Karwari comes from the city of Karwar, Karnataka. Hence, it has a little South Indian touch as well, in its designs. Generally, these naths are studded with stones, gold-plated and merged with Basra motis or pearls, which are rare and beautiful. Designs from this category differ a bit as Banu and Karwari naths are more circular whereas these nath designs are studded with two flower like designs one below the other, studded with single large stones and pearls, making them looking longer and a bit straight. Such designs would look great on women who have a round nose or who are already wearing very heavy jewellery. Apart from being extremely famous for their valour, courage and bravery, Peshwas were also cherished for their love for art, culture and creativity. This inspired designers to make unique nath designs, known amongst Maharashtrian women as Peshwai Nath. These naths are a bit smaller, more circular and go well with other Pearl Jewellery and Kolhapuri Saaj. Although women generally prefer Gold-plated metal naths with pearls, the latest in the addition are Diamond Naths. Studded with American diamonds or real diamonds, these naths are made of gold or silver. If you are not a Richie-rich, or want a lighter version of these designs, you can go for transparent stone studded Maharashtrian naths, wherein the pearls are replaced by stones. Pachu or Emerald Nath designs are also very beautiful and suit Maharashtrian looks very well. The design doesn’t vary much, but the other coloured stones are replaced by emeralds, to give a royal and ethnic appeal to your nath. Nath is a very integral part of Maharashtrian jewellery and adds elegance to your overall appearance. But before buying them or looking for them, a lot of women wonder……..

“Do I need to pierce my nose to wear these beautiful Maharashtrian Naths?”

Well, the answer is NO. You don’t necessarily have to pierce your nose to wear these elegant naths, as nowadays, varieties of Maharashtrian naths are available in the form of Clip-on naths, which you simply have to clip on, on your nose. They’re light, easy to wear, and friendly to the skin.

Even if you are not a Maharashtrian, you can always experiment with your style and try out a traditional look with these nath designs! Go get them!

< #IndianFashionTrends: Latest Nose Pin Designs and its Significance (Prev Post)
(Next Post)How am I taking care of my Art Jewellery this Monsoon? >